Making A Podcast in Audition 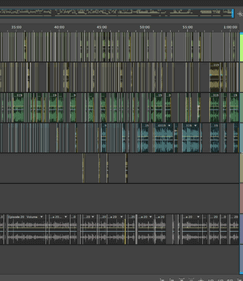 The show usually starts with us recording discrete tracks for each host with Audio Hijack Pro. It is, frankly, the best audio capture application available for any system, but it is only available on Mac OS.

Once we sync the files from the studio machine to our work stations via Dropbox, Steve and I begin editing.

The editorial file is a simple 44100 six track multi-track editor.
Six?
Yes, Six. Aaron, Jenn, Jim, Shea & Steve plus a guest track. It’s a template. I just delete the track for any given week’s missing host.

Once I’ve done the editing as needed I export the completed segment files. Each episode of Waiting 4 Wrath is a series of individually recorded segments. Each segment, all two to six tracks, are grouped (cmd + G) and then exported as a multitrack mixdown. This is just the default Multitrack mixdown.

Each segment is then imported into a show template sesx file. This is a template I have setup and copy and rename (well, a script does this but whatever) each week. The file contains three active tracks: the vocal track, a sound effects track, and a music track. And a few additional items, a track that is muted so I can shift things around and play about and an SFX bus so I can sidechain the vocals.

From here we need to set the various tracks effects and settings.

First the Vocals track – this is the track onto which I put all the segments I cut earlier. It has a single Multiband Compressor. This is a custom version of the vocals preset.

This setting is unique to our voices and environment so make sure you modify it for your own recording setup.

From there I have a Sound FX track. On this, we apply a Parametric Equalizer.

You’ll notice again in the Mixer area that both the Sound FX and Music tracks are set to output to the SFX Bus. What is an audio bus? For that, check out YouTube. In a nut shell, a bus is a pipeline that X-many audio streams go through and are modified by the settings on the bus. The effect we’ll apply to the bus, and thereby both audio tracks, is a custom Dynamics Processing.

Now the magic happens. Side Chaining!

Again, check out YouTube for a guide to what we can do with Buses and Chains, but for now, I’ll just say that we want to side chain the vocals track to the sound FX bus. This will cause the Vocals audio to take precedence over the SFX bus. So as we fade out music from a segment the hosts first few words will be heard more clearly than they would otherwise. It basically auto-ducks the SFX.

To accomplish this select the Dynamics Processing we put on the SFX Bus in the side chain menu of the vocals track.

Now that the tracks and mix are setup, we can paste in the segments of the show. Completed segments go on the vocals track and any sound effects (all our beer bottle opening for example) go on the SFX track and our intro, interstitial, and outro music go on the Music track. It should look something like this.

Finally, I’ll do the MP3 Export. This produces the file that is, almost, what goes into iTunes.

The sub-settings for this export window are as follows.

It’s super important to make sure that you’ve set the output to Constant bit rate. If you use a variable bitrate it will make a much smaller but iTunes will lose its shit on the file. For some, real dumb, reason Apple hasn’t setup variable bit rate playback and it doesn’t seem like it’s going to. For more info on this check out this post from Marco.org.

From there the MP3 is imported into Chapters, I add the unique show art, title and author info and then all the chapters. The final file is exported from Chapters and uploaded to Patreon or our site as needed.