Episode 151 – The One Where Frida Rescues Our Crabs! 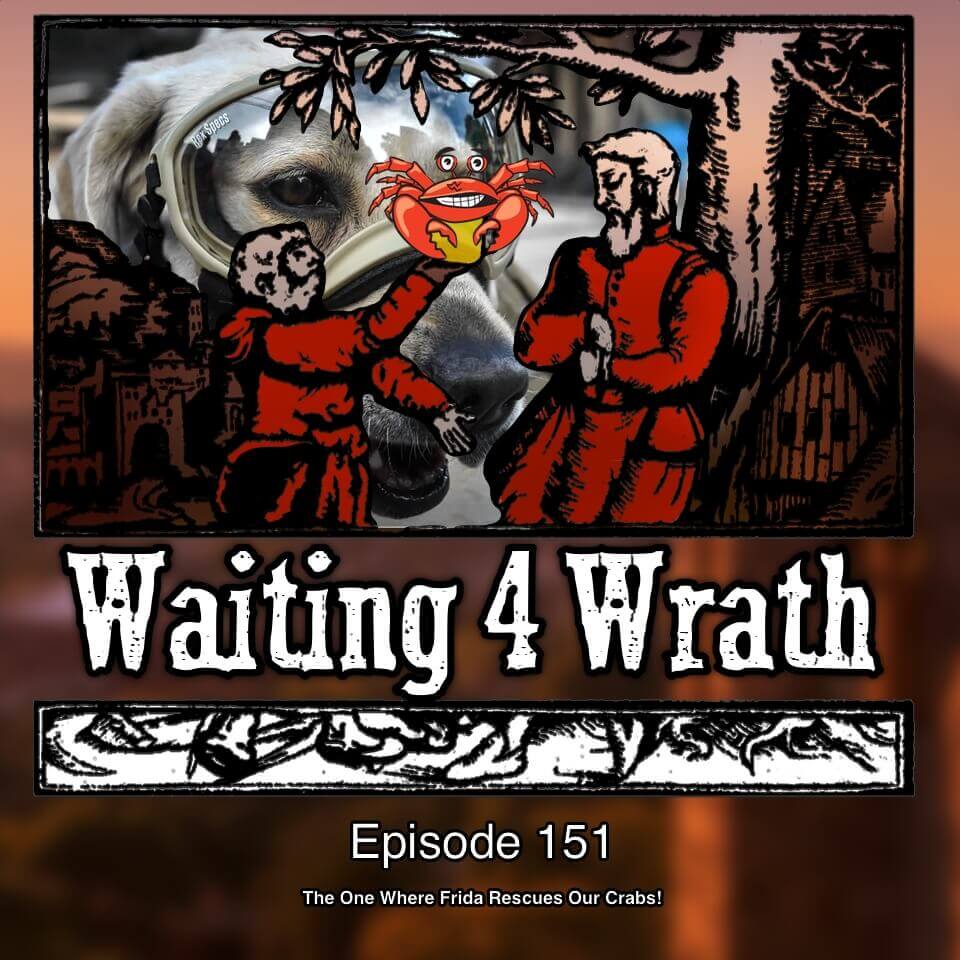 ← Previously: Episode 150 - The One Where #BugsAreForGirls! Next Up: Episode 152 - The One Shelley Probably Shouldn’t Listen To →

In This Week’s Show, episode 151, happy dogs ride-share a vag-share for a quarter of a dino pussy.

Now, grab a beer and help us test the god hypothesis — because, while Ru Shou, messenger of the Chinese sky-god and totem of the West and Autumn hasn’t struck us down yet, we are trying his patience!

I’m Jenn, and in honor of the recent Autumn Equinox, did you know that (since the sun shines directly on the equator during this time) an enormous “snake of sunlight” is said to slither down the stairs of the Mayan pyramid at Chichen Itza in Mexico?

Shea is my spirit animal
From Recovering Catholic.
RATING: ★★★★★

In honor of the 150th episode, I felt the need to update my review. Jenn, Shea, Aaron, and Steve have an awesome show to listen to. Big Gay Jim is always a pleasant guest when he arrives for the shenanigans. As I said before it truly makes the Friday night feeding of 3 horses, 3 goats, 14 chickens, 3 ducks, and my two dogs truly enjoyable. Here is to another 150 episodes.

Jenn here, so we’re getting really close to 500 likes on Facebook!
If you enjoy listening to us and want to do something easy to show your love, could I ask you to please go on FB if you haven’t already and like our page? Since we just hit the epic 150 episode milestone, it’ll mean a lot to me, the FB page overseer, to hit 500 likes. Puhleeese! (if we pass 500, let’s just keep it going!!)

Don’t forget to check out Waiting4Wrath.com for cool shirts, hoodies and our Amazon widget that will let you do your usual Amazon shopping and donate to us without spending an extra penny!

Of course, you can always visit patreon.com/w4w to support the show and get longer cuts!

In the least of the worst actions by any recent political candidates, I present Democrat Frank Scurlock. He’s currently in the running for Mayor of New Orleans. In a now hilariously ironic turn of phrase, his campaign motto is: ‘Make New Orleans Fun Again’.

When she did, she allegedly found Scurlock with his pants around his ankles, his shirt pulled up and his erect penis in his hand, White said referencing the driver’s statement.”

The driver then went to a gas station to call the police, an opportunity that Scurlock allegedly used to flee the scene. Police then went to Scurlock’s hotel, and the driver identified him from a photo line-up, Santa Monica Chief Deputy City Attorney Terry White told the paper.

Oh, also, Scurlock is most well know as his family invented bouncy castles. Make of that what you will.

Our headlines aren’t always the most uplifting of stories. For example, Central Mexico was hit by a 7.1 magnitude earthquake on Sept 19th, which has left at minimum close to 300 people dead and an untold amount of physical and commercial destruction. In addition, as of Saturday the 23rd another mag. 6 has hit as well.

This determined, beautiful lady has been working nonstop to help rescue trapped victims, and the number saved so far has not even been tallied, but at least 12 have been found alive and rescued and she has also located over 40 deceased victims.

She has been an image of courage for Mexico’s army. “It’s a source of pride to work with Frida.” says serviceman Israel Arauz.

Sadly, at the age of 7, she only has about another year left before her senses begin to decline to the point she will probably be retired.

Oh yeah, Frida’s a yellow Lab. Who rocks a custom pair of goggles to protect her sweet little eyes and a super fly set of booties.

Just as I personally usually eat little meat, I will destroy an aquatic ecosystem if someone catches/snares/or nets it for me. Well, large herbivorous dinos such as the duck-billed group called hadrosaurs apparently often supplemented their plant diets with sea creatures such as crabs as crayfish.

How does science know this? Whyshit of course! Fossilized dinosaur droppings from Utah now reveal that 75 million years ago the veggiedinos were sneaking into the prehistoric version of Red Lobster. This was done likely to get extra protein and calcium into their bodies before laying eggs, says Karen Chin, a paleontologist at the University of Colorado Boulder. She and her colleagues report the discovery on September 21 in Scientific Reports.

Chin has long hunted for coprolites from herbivorous dinosaurs. In 2007, she reported finding fossilized chunks of rotting wood inside coprolites, between about 80 million and 74 million years old, from the Two Medicine rock formation in Montana. Plant-eating dinosaurs may have chewed the wood in search of insects and other organisms scurrying inside rotting logs, she proposed.

This just goes to prove that pregnancy cravings are real, powerful and predate history.

Bike-sharing services are doing so well in China, developers decided to take more users on a joy ride—although of another kind.

Adult app Taqu—which means “fun for him” in Chinese—recently rolled out a limited-time “shared girlfriend” service in Beijing, which allowed its 53 million users to have recycled plastic partners delivered to their homes. The company has also adopted ‘Touch’ as its English name.

The dolls’ lower parts are changed for every customer:

The service was suspended abruptly after authorities received complaints that Taqu had been promoting shared girlfriends in public.

“We apologize for the negative impact our ‘shared girlfriend’ project has had on society— especially the online environment—ahead of the significant meeting.”

Buddhists And Their Crabs – http://bit.ly/2xsLFlY

In 2015, Zhixiong Li and Ni Li, two Buddhists animal lovers, took £5,000 worth of crabs and lobsters — more than 700 creatures in all — and released them into the English Channel.

Unfortunately, they’re an invasive species now threatening the entire ecosystem. A problem local officials are still dealing with to this day.

The two Buddhists were handed a £15,000 fine this week for their irresponsible faith-based actions.

The irony here is that the Buddhists, by acting on their pro-animal rights position, may be guilty of killing off countless sea creatures through their actions.

Instant Update!
Since this was recorded SA has decided to be a little less shit to women living there by allowing them to… drive!
Check out this and other stories on our facebook page: http://bit.ly/2wV98dH

Saudi Arabian cleric Saad al-Hijri, who is the “head of the religious edicts department in the southern province,” said during an “evils of women driving” lecture that women only have a quarter of a brain.

In a video Hijri asked what the traffic department would do it if it discovered a man with only half a brain.

“Would it give him a license or not? It would not. So how can it give it to a woman when she has only half?” he said.

“If she goes to the market she loses another half. What is left? A quarter… We demand the traffic department check because she is not suitable to drive and she has only a quarter.”

Al-Hijri was suspended from leading any religious tasks for an unspecified amount of time. Saudi Arabia forbids controversial speech that doesn’t “serve the national interest,” and even government officials aren’t immune from that.

In the meantime, he’s being mocked mercilessly on Twitter for his remarks. The BBC reports that “an Arabic hashtag that translates in English to ‘Al-Hijri says women have a quarter of a brain’ was used 119,000 times in 24 hours.”

Veteran Uses Horses To Treat Other Combatants With PTSD – http://bit.ly/2xE73qa

Sam Rhodes is no stranger to the toll that war can take on a person’s mental health. He is a retired Army Sergeant who returned from combat in 2005. In that time, he had considered taking his own life and dealt with a multitude of physical and mental repercussions from his time in service.

“I spent 30 months in combat. It affected me more than most,” Rhodes, 56, told HuffPost. “I considered taking my own life, and I was getting ready to do that. I’m still working through that. It’s a tough battle.”

However, in 2008 he began to spend time working with horses, to distract himself from his inner demons. He said it gave him a new, deeper feeling of peace. A peace he wanted to share with other veterans.

Fast forward a few years and he now owns and operates Warrior Outreach which offers free programs that teach veterans and their loved ones the basics of horse riding and care. He operates out of his ranch in Fortson, Georgia, about 30 miles from Fort Benning Army Base.

It now attracts thousands a year. Some come to ride the 20 miles of trails, work in the barn or train newcomers. Others just to spend time in nature, relaxing with the animals and enjoying the scenery.

“Last year alone, over 16,800 people were touched by our program in some way,” said Rhodes. Between 11 and 20 percent of soldiers returning from Iraq and Afghanistan have PTSD, according to the United States Department of Veteran Affairs. The condition can occur after a traumatic or life-threatening experience and may cause prolonged periods of anxiety, jumpiness, bad memories and disturbed sleep.

Rhodes hopes that Warrior Outreach can give soldiers with PTSD the opportunity to rebuild their confidence, reconnect with their families and build new relationships with others who have gone through similar traumas.