Episode 213 – The One Where We Learn We’re Agnostic 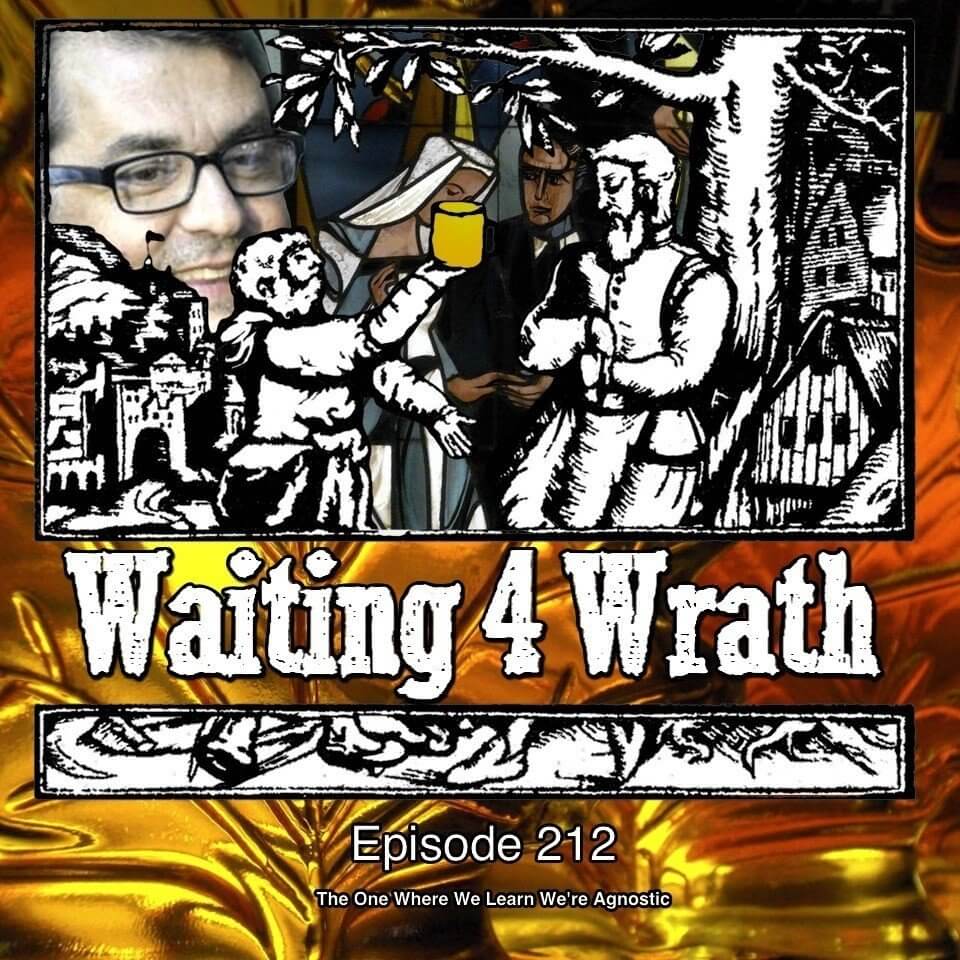 In This Week’s Show, episode 213, we fly the too-friendly skies right into the heart of Australia’s elderly, puck-wielding, pladipy-pugilist parade, to find out why Everyone’s Agnostic.

Now, grab a beer and help us test the god hypothesis — because, while Ammon (the North African counterpart of Zeus) hasn’t struck us down yet, we are trying their patience!

This week I learned you can tell someone to have a nice day but if you tell them to enjoy the next 24 hours you always sound threatening.

Did you know that Ammon was originally an Ethiopian or Libyan divinity, whose worship subsequently spread all over Egypt, a part of the northern coast of Africa, and many parts of Greece?

Coming up is a conversation with Cass of Everyone’s Agnostic

Voicemail: re: sexism from customers

No new Patrons. Boo, you should sign up for patreon.com/w4w and for as little as a buck an episode you’ll get longer shows with exclusive stories (this week is properly hi-fucking-larious) and free episodes of 4 More Beers! What’s not to love?

Thanks to RW for the influx of new beers!

Update – Dutch Troll isn’t allowed to change his age to 20 years younger no matter how young his doctors say he looks. In a press statement, the court added: “Mr. Ratelband is at liberty to feel 20 years younger than his real age and to act accordingly. But amending his date of birth would cause 20 years of records to vanish from the register of births, deaths, marriages and registered partnerships. This would have a variety of undesirable legal and societal implications.”

The D for Dunkin that is. http://bit.ly/2ATd2Ib

“Starbucks is keeping the doors wide open for convicted sex offenders and patrons to fly under the radar from law enforcement and use free, public WiFi services to view or distribute graphics or obscene pornography, child pornography (an illegal crime), or engage in sexual predation activity,” the petition statement reads.

So as of January first, 2019, all pornographic content will be filtered. “To ensure the Third Place remains safe and welcoming to all, we have identified a solution to prevent this content from being viewed within our stores and we will begin introducing it to our U.S. locations in 2019,” a Starbucks representative told the publisher.

This week I’m doing my northern duty by keeping you all informed about one of Hockeyland’s most dangerous criminal elements – Sticky & The Bandit!

Unlike professional contraband runner Smokey, Sticky forgot to repaint the semi they had stolen. The large vehicle was reported stolen and shortly thereafter spotted by Mounties outside of the tiny town of Chestermere, Alberta.

Also, apparently, Smokey was the cop, not the trucker. I forgot that bit…

Realizing that he was about to get taken down full-on, no holds barred, Moosewood Stadium freestyle, he jumped from the tanker, abandoning ~20K$ of stolen Canadian Gold. He then jacked a nearby silver pos and took off, leading mounties on a high-speed chase from Turner Valley, Nanton, High River, and Claresholm. Two sets of nail strips were used, flattening all four of the car’s tires, which eventually stopped him on Highway 22. Shelby Klman, Shawn Mclaughlin, and Char-ee Farnell now face nearly a dozen combined charges, including possession of controlled substances, evading arrest, and the theft of that most precious of substances, Maple Syrup.
The total amount of syrup stolen was valued at nearly $110k

What does school safety and hockey have in common? Well, a Michigan college thinks hockey pucks… Oakland University, a public school in Rochester Hills, near Detroit, thinks the small hefty rubber pucks are the perfect weapon against school shooters. So far they have given out 2500 hockey pucks: 800 for union members and 1,700 for students.

Apparently, the hockey puck idea stemmed from an active shooter training session that happened earlier this year. A participant at the training asked Oakland University Police Chief Mark Gordon what items people could use to defend themselves on the campus, which has a no-weapons policy, the Detroit Free Press reports.

A hockey puck was a “spur-of-the-moment idea that seemed to have some merit to it, and it kind of caught on,” Gordon said.

The school participates in active shooter training a few times a year teaching the “run, hide, and fight” method that emphasizes running from the shooter before anything else. “If you threw [a hockey puck] at a gunman, it would probably cause some injury. It would be a distraction if nothing else,” the police chief said.

“I find it, at first, absurd,” echoed student Adam Kalajian. “If there’s an armed person coming in, why would you chuck a puck at them?”

These pucks also have a secondary use, emblazoned on all of them is a way to donate to the university with funds being used specifically to add locks to the inside of classroom doors.

They say the trick to business is located. Like, putting an oil well in the middle east, or a Chinese buffet next to a veterinary clinic. But now “they” – the generation most recently in charge of everything – is saying something else. The entitled retirees of Brisbane aren’t having their city council’s newest plan to make their deaths easier on everyone else.

Like most old, spoiled, baby-boomers, the residents of Palm Lake Resort – a ‘retirement’ home probably upstate – are urging the city to cancel local business development because apparently plans for a crematorium to be built next door just aren’t in keeping with the hometown feel residents of spider-malaria-ville are accustomed to. Apparently, they “all know we are going to go at some time or other but we don’t want to be reminded on a daily basis every time we go shopping and go past the furnace,” Ron Wells said, then adding that when he was young he had to carry the spider-riddled corpses of his relatives to a crematorium on his own, up-hill both ways, wading through a blizzard of invasive-mice – without shoes. Of course, when I was young I had video games like DOOM to teach me that yes, we are all indeed flammable regardless of location, health, or bonus armor class. Who needs a dose of the real world now eh?

“I don’t want to think if my neighbor dies that I’m watching her being burnt across the road,” complained resident Diane Cordaro, “I know we have to have it, I realize that, but not in a built-up area, take it away”, not adding, perhaps the other side of one of those generational-divides I’ve heard so much about.

Of course, the other side of that out-of-sight, out-of-ern, coin is that without the crematorium someone will have to carry them to their final resting place grossly intact – old people these days eh. Some other old people who hate to make discarding their corpses easier on their kids have raised concerns about the crematorium company, whose owner pled guilty in 2012 to driving some 60 bodies, 4 at a time, nearly seven hours to Rockhampton because it was cheaper to burn them there… which presumably means Rockhampton either has super low gas prices or far too lax fire-pit laws. Also, how does living in a hospice not already constantly remind you the end is nigh?

All said and done, this is just another case of baby booms these days, spoiled by comfortable lives full of polio-vaccines and job opportunities, really just wanting to make their funeral cake and eat it too, ugh.

Patrons, don’t shoot your dicks off!

Today’s faith is two stories, one brief, one heart-warming in the extreme.

First, we need to give a nod to Patagonia, whose CEO Rose Marcario, recently announced on Facebook that the company would give all $10 million of their Cheeto-y tax break to organizations fighting climate change!

Meanwhile, on a slightly smaller but no less important scale, the nurses at Mercy Children’s Hospital in Missouri won a bit of the Mega Millions lotto – around $7,200 after taxes. Rather than divide the winnings up they split the money between two of their staffers, Gretchen Post, and Casey Orellana.

For Post, who is a nurse at Mercy’s, the money will cover the funeral of her 17-year-old son, who tragically killed himself the night of the lotto. “I know it’s not the $1.6 billion dollars, but here is what we have to offer you,” Post’s co-worker recalls saying to the nurse. “Hopefully, it’ll help.”

To Orellana, a neonatologist whose husband was just recently diagnosed with Sarcoma, the money will help them afford his expensive medications.

And so, financially responsible and generous people, you are our bamf’s of the week!