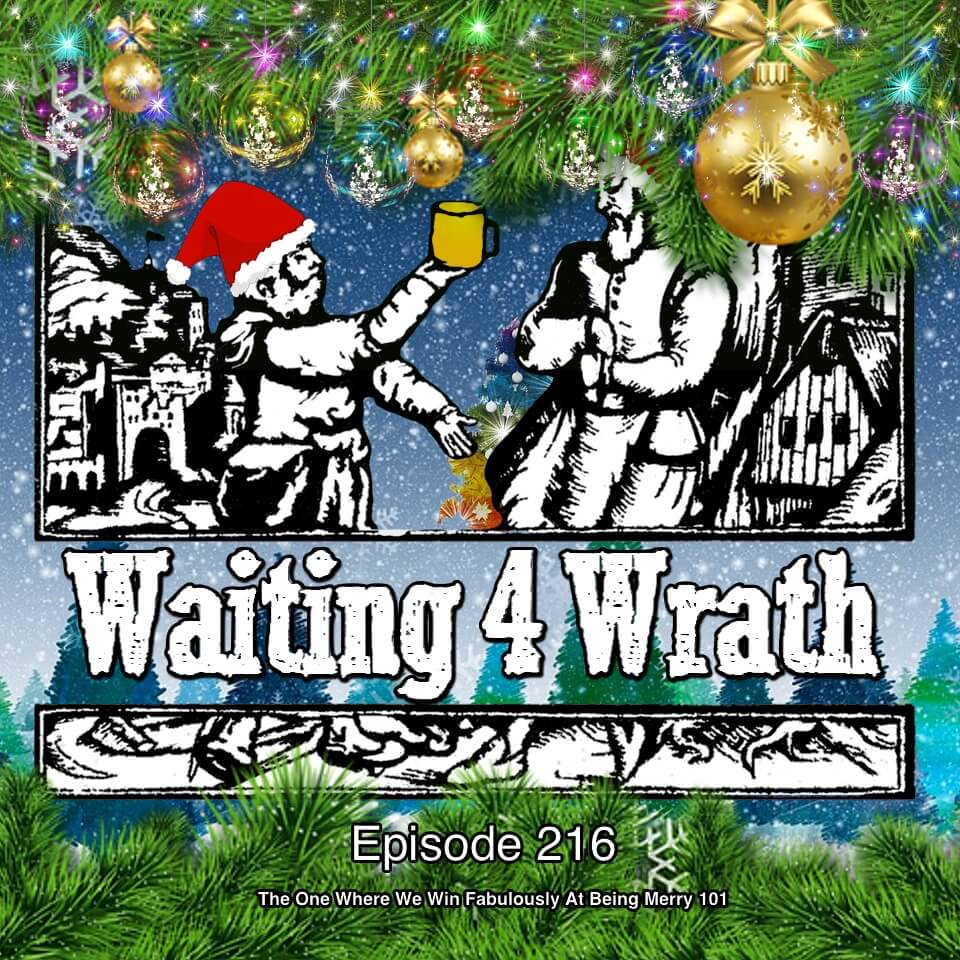 In This Week’s Show, episode 216, we wish you a happy and a merry… blow up gift that’s just for you, like this show!

Now, grab a beer and help us test the god hypothesis — because, while Beira (the Gaelic Queen of Winter) hasn’t struck us down yet, we are trying her patience!

This week I learned that Santa is regretting giving bad children coal now that global warming is threatening his workshop.

Did you know that Beira, in addition to being the personification of winter, was also the mother to all the Celtic gods and goddesses? She also supposedly created Loch Ness by turning her lazy maid into a river. That got lazy and made a loch?

Hey all, have a happy and merry eh!

Well… at least they didn’t worship it. Or, velcro gloves not included!
Love a good Rocky & Bullwinkle title joke… anyway, all I want for Christmas is to fuck a sheep.


Sex dolls shows up a lot in our show, but not as many of those stories are about sex as one might expect. Case in point, you’d think someone in Scotland would be better at identifying sheep — or at least be able to tell which ones are for fucking. Helen Cox, 46, is not so gifted. Her son, however, was gifted … a blow-up sheep to take to school for the nativity scene. The five-year-old, dressed in a dish towel-Keffiyeh and a red robe, was sent home. See, the doll, which had been listed online as “Labreeze kids boys brown shepherd costume inflatable sheep nativity fancy dress outfit,” had a more-anatomically-correct-it-should-be sheep-hole, and was tarted up like a cheap whore, completed painted-on eyelashes and red lips. “I just can’t believe it. I don’t know whether to laugh or cry! How am I going to explain this to his teachers?” the mom of two said. “I told him, ‘you can’t have this sheep, Alfie’ – but he kept asking why so I had to make up a reason,” Cox laughed, explaining that Alfie refuses to give up his new toy. “I told him it didn’t look like a proper sheep because it had a mustache, red lipstick and a bow on its head, but he still wanted to play with it.” She added that she plans to take the sex doll from him soon and claim it was the Elf on a Shelf — cementing what I’m sure won’t at all be years of expensive psycho-sexual elf-sheep centaur-based wellness therapy in Alfie’s future. Finally, in mom’s defense, it really does just look like a cheap, vinyl-plastic, beachball-esque balloon animal, I mean, it doesn’t even look sturdy enough to sodomize…

Jenn’s Story: KFC is bringing the war on arteries to the homefront: Introducing the KFC (11 herbs and spices) scented fireplace logs!

For more than a million years, mankind has been attempting to improve upon the simple fire. We’ve tried burning different things like sticks or leaves or various incriminating documents. We’ve tried making fires last longer. We’ve even figured out how to turn them into different colors. All of that experimentation, all of that innovation, has culminated in this event, the KFC 11 Herbs & Spices Firelog, from Enviro-Log®.

Imbued with the unmistakable, mouth-watering aroma of Colonel Sanders’ secret recipe, the KFC 11 Herbs & Spices Firelog finally puts to rest the age-old dilemma, “How can I make this fire a hundred bajillion times better?” This one-of-a-kind firelog from Enviro-Log, a leading manufacturer of firelogs made of 100 percent recycled materials, is the result of countless hours of research and development, all done over the last couple of months since we had this idea. Pick up a firelog today, and you’ll be wondering how you were ever able to enjoy a fire that didn’t smell like fried chicken.”

As a Wyoming resident, I would prefer not to coax grizzlies out of hibernation to wander into town and eat my chimney. Thanks.

Apparently, KFC definitely has its finger on America’s weak, thready pulse. The logs have been sold out almost since the announcement.

Ok, I was wrong. All I really want for Christmas is one of them chicken-logs… and for our government to be as festively-generous and socially responsible as a Colombian drug cartel.


While military forces patrol our southern border, shielding us from the terror that is scared, shoeless, starving, children, the Gulf Clan crime gang, considered Colombia’s largest criminal organization, has declared a month-long ceasefire for Christmas and New Years, and invited other armed groups to also lay down their weapons for the holiday season. That’s right because we’re actually the mirror-mirror universe, people with sinister goatees are the good guys, and this Christmas-themed feel-good story is about the Usuga Clan, aka, the Autodefensas Gaitanistas. They’re accused of operating drug trafficking routes with Mexican cartels, also extortion, illegal gold mining, and what I assume is a very long list of less eye-grabbing crimes. Also, because it’s 2018 in bizarro-land, massive cartels of people doing illegal shit have official websites where they post things like “we declare a unilateral ceasefire of offensive military action nationally in all of the areas where we are present, between Dec. 8, 2018, and Jan. 10, 2019. […] we invite all armed groups who are part of the conflict to adopt a similar position to ours, always with the goal of contributing to the cause of peace.” It has long been traditional for Colombia’s armed groups to declare a holiday and election period ceasefires. The now-demobilized Marxist FARC rebels regularly stopped armed offensives during Christmas.

So yeah. Be more like Colombian drug dealers ICE.

Thanks to the patrons for their generosity.

Both in giving to the show and also in being cool with us occasionally posting the longer cut of the show publically. Lest we condemn the rest of the listenership to hearing even a minute more of uncle Adolf’s nogg-inspired theories about the ethnically diverse, sexually fluid, lizard- alien, flat-fifth dimensional, Monsanto-chemtrail based mind controlling one-world-order agents stopping him from finally getting that unicorn-esque lucky break he’s, like totally, known was coming since his last big, coke and mullet fueled, success in high school football.

Santa has a rough year folks.

Also, if you’re in the room with someone who thinks Santa’s real, please recall the bit about playing this over open air and how it may go quite poorly.

A British Santa Claus was just trying to help the kids and elves and maybe even elf-kids to safety this week when a fire alarm went off.

Like all good jolly old men overly interested in having kids sit in their lap, Santa got all set up right next to a family friendly rave. With a smoke machine. Naturally, Santa’s grotto filled up with smoke and the smoke alarms did what they do.

Luckily, Santa is a man of action. He immediately sprung to his feet, ripped off his fake beard, and shouted “Get the fuck out!” to a room full of children. Repeatedly.

“He came [charging] in, ripped his hat and beard off in front of 50 odd kids and started shouting and swearing at people to leave,” an attendee named Adam Gaynor said in a social media post, according to the Telegraph. “My friend’s little boy was upset as his dad was carrying him when Santa told them ‘to get the [expletive] out,’ ” she told the news site. “We told our children he wasn’t the real Santa. He was an impostor and will be going on the naughty list.”

Organizers apologized later for “any offense or distress caused to parents and children.” And also promised not to hire Billy Bob Thornton to be Santa again.

Meanwhile, in London, where a Santa can really get his groove on, has seen its own trouble Clauses. Recently, footage has emerged showing the darker side of raising money for children’s charities by organizing a Santa-costumed pub crawl.