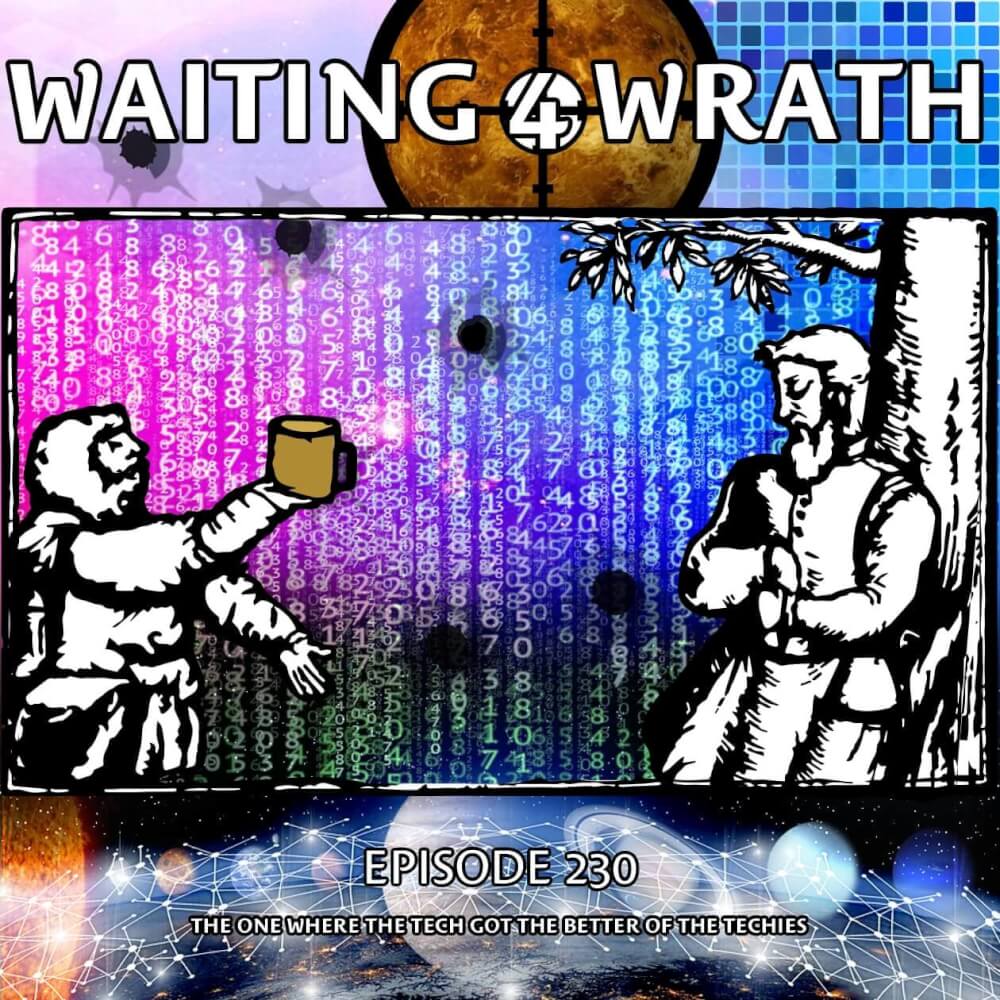 In This Week’s Show, episode 230, we properly fucked up the record, so enjoy most the show!

Now, grab a beer and help us test the god hypothesis — because, while Otunairanga (the Maori guardian of palms and flax) hasn’t struck us down yet, we are trying his patience!

Shea’s Life Lesson
This week I learned about seagulls, they are just pigeons possessed by demons, the average seagull is three stories wide, they feed on chips and children’s fear, and they can fuck right off.

Jenn’s Actual Lesson
Did you know that bones found on Seymour Island indicate that, about 37-40 million years ago, penguins stood about 6ft tall and weighed around 250lbs?

Side note, Apple Pie’s Americanness was likely engrained during the second world war. Soldiers when asked why they enlisted, would commonly reply “for mom and apple pie.” The actual origins of Apple Pie go back to 1381 in England; an apple pie recipe was printed by Geoffrey Chaucer and included apples, figs, raisins, pears, and a pastry shell but no sugar.

Recently in Delaware, there was a school lockdown that was, frankly, a shit show. “So my kids (sic) school had a genuine lockdown today,” wrote Shelley Reed, mother of a 7-year-old at the school, “some whack job called in a bomb threat. Police came and everything was fine, Thank God!” All was fine, but after the event, Shelley noticed markings on her daughter’s arm. Looking closer she saw, hastily written in purple Crayola marker, was “Love Mom and Dad.” When asked why the 7-year-old – just gonna keep saying that – the 7-year-old said: “in case the bad guy got to us and I got killed, you and daddy would know that I love you.”

And that’s the reality of schools and childhood in America.

Fast forward to modern Columbine and nearly 20 years after the mass shooting, it’s still affecting the students. Students who, by the way, hadn’t even been born when the shooting took place. Most of the attention comes from shitty, shitty people treating the school as a tourist location. So shitty…

The more important attention is from current Columbine students. Kaylee Tyner, 17, told CNN that she was inspired by Emmett Till’s death and legacy when she began #MyLastShot.

For those unaware, very briefly, Emmit Till was lynched in August of 1955 for purportedly flirting with a white woman. A few days after the interaction two men, bristling with guns, forced their way in Till’s uncle’s home, abducted, beat, mutilated, and murdered the boy. Dumping his body in the Tallahatchie River. Those accused of his murder were acquitted after a seedy-as-fuck Mississippi trial and, knowing they couldn’t be retried, later admitted to the murder in magazine interviews. Eventually, his body was returned to his mother who insisted on a public, open-casket funeral. Photos of the body would spark nationwide discussions on the brutality of lynching and the horrors of the American south’s Jim Crow era caste system. Later, they would play a role in the civil rights movement and Till’s story would be codified in our national memory though numerous statues, books, movies, and more recently, the student’s of Columbine.

Speaking of Emmit, Kaylee said “his parents insisted the world see the imagery of his death,” adding that the image “exposed the racial divide in our country and helped usher in the civil rights movement.”

“Our country has a history of photography affecting real change,” Kaylee said, speaking of her #MyLastShot campaign which seeks to make available stickers for student IDs, Drivers Licenses, or cell phones, that read “In the event that I die from gun violence please publicize the photo of my death. #MyLastShot” stickers can be ordered or printed from MyLastShot.org.

Speaking of footage from Marjory Stoneman Douglas High’s shooting she said “those videos were just so horrific and so real, I remember seeing people on Twitter saying it was so horrible … but what I was thinking was, no, that’s the reality of a mass shooting.”

Perhaps morbidly, but realistically, the site also gives the steps to ensure your last wishes are respected. Beginning with getting and placing a sticker on your ID, step 3 is talking with your family about your wishes. When Kaylee first talked to her parents she said it “makes them uncomfortable, but that’s how it should be.” Step four is to find an advocate that will ensure your photos are released. And Step five is making sure everyone knows to share those photos with #MyLastShot so they are spread as wide as possible to insight as much conversation as possible.

After every shooting in the States, there are a few stages, shock-and-awe, disbelief, then the attempts at gun control discussions that are frequently hushed “out of respect” or because “it’s too soon” to talk about. Of course, the “now’s not the time” brigade play that card literally all the times. Kaylee’s reply is simple, “It’s hard for [her parents] to think about their own child dying, but the reality is that gun violence has such a large impact on the community and (is) such a large threat. It’s a conversation that needs to be had.”

Gun violence activists and school shooting survivor David Hogg has recently shared a photo of his driver’s license with the sticker applied. While many are arguing that “leaking” such imagery is disrespectful to parents, unsightly, or otherwise distasteful, the kids behind #MyLastShot would reiterate that the images aren’t “leaked” they’re intentionally spread as the last act of defiance against a society that values guns more than their lives. And I would say that if you find the idea of viral images of shot-up kids more distasteful than the shot-up kids, you’re the problem.

So there ya go, in the absence of action from our leaders, our youth are rendering down their childhoods into viral catchphrases in the desperate hope that someone will pay attention before the next school shooting, which they entirely justifiably fear, will be at their school.

Much has happened today (day of recording) in the world of extraplanetary exploration and gas. And yes, by gas I mean the fart kind of ga, or at least a major component of said toots.

Just released today in Nature Geoscience is confirmation that NASA’s Curiosity Rover detected a methane spike on Mars in 2013 while exploring Gale Crater. It was confirmed through a re-analysis of data collected by the European Space Agency’s Mars Express orbiter at the time. Specifically, data collected by the spacecraft’s Planetary Fourier Spectrometer on June 16, 2013, when it was above Gale Crater, are in accordance with measurements taken by Curiosity the day before.

Now, why is this even newsworthy? Well, first of all, just the idea of methane on Mars has been a matter of much debate among scientists. Per science.com: “While previous observations, including that of Curiosity, have been debated, this first independent confirmation of a methane spike increases confidence in the detections,” said study lead author Marco Giuranna, of the Istituto Nazionale di Astrofisica in Rome.” Observing potential gases from Earth presented problems as well, as the much more plentiful methane in our planet’s atmosphere can complicate observations and interpretations.

Secondly, methane is thought to be potential biosignature. Even though the gas can be produced by a variety of geological processes, the vast majority of methane in Earth’s air is pumped out by microbes and other living creatures like cows and Steve.

The trouble with detecting methane, however, (and why this has only recently been proven) is that it doesn’t last long in the atmosphere. Any methane that is detected would have to have been released relatively recently. For Mars, this means the gas is likely venting up from beneath the surface. What’s more, the sporadic, intermittent nature of these apparent methane spikes suggests the methane is being released at irregular intervals.

Because of this, of course, Giuranna and his crew wanted to be very careful in this announcement and have only announced the confirmation after observing 20 months of data collected by the Mars Express, and also by developing a new technique that allowed the researchers to scour through hundreds of measurements made over a single area. Interestingly, Mars Express detected no other methane spikes during the observational period aside from the one detected by Curiosity.

This one particular uptick hit a peak of about 15.5 parts per billion (ppb) methane by volume on June 16, 2013. That was just one Martian day after Curiosity detected a peak of nearly 6 ppb.

“We were very lucky, as this is not the result of coordinated observations,” Giuranna told Space.com via email. “Just by chance!”

(An aside: background methane levels in Gale Crater’s air, as measured by Curiosity, range from about 0.24 ppb to 0.65 ppb.)

“In general we did not detect any methane, aside from one definite detection of about 15 parts per billion by volume of methane in the atmosphere, which turned out to be a day after Curiosity reported a spike of about six parts per billion,” said Giuranna in a statement “Although parts per billion in general means a relatively small amount, it is quite remarkable for Mars—our measurement corresponds to an average of about 46 tonnes of methane that was present in the area of 49,000 square kilometers observed from our orbit.”

At the time of the Curiosity observation, scientists figured the methane originated north of the rover and was carried to the Gale Crater by southerly winds. The new interpretation presented in the new study offers a different scenario. The quantity of methane detected, along with the geology of the area, suggests the methane spike occurred within Gale Crater itself.

Now the question to answer is the ‘where is the methane coming from?’ The paper discusses some theories, including methane being trapped under ice and released in increments. “That methane could be released episodically along faults that break through the permafrost due to partial melting of ice, gas pressure buildup induced by gas accumulation during migration, or stresses due to planetary adjustments or local meteorite impact.”

So this is paving the way for some more Martian exploration. The European Marx Express is set for a future trip. Until then, another spacecraft that is specifically made for gas-sniffing, the Trace Gas Orbiter arrived on Mars in October of 2016. The TGO (part of European-Russian Exo-Mars program) is also utilizing the experience of Giuranna and his team. And coordinated TGO-Mars Express measurements are in the works. The PFS team also aims to apply its new analysis techniques to the instrument’s entire data set, Giuranna said.

“Follow-up is very important to better understand methane on Mars,” he said. “We are collecting pieces of a puzzle and need more pieces to understand better what is going on.”

To comment on a show or suggest a brew visit our web, Twitter or Facebook pages. As always, we’d love to get a good rating on iTunes, Google Play, or Stitcher!